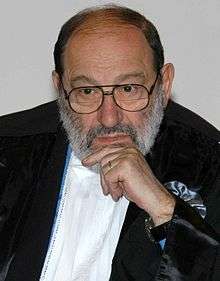 Umberto Eco OMRI (Italian: [umˈbɛrto ˈɛːko]; born 5 January 1932) is an Italian semiotician, essayist, philosopher, literary critic, and novelist. He is best known for his groundbreaking 1980 historical mystery novel Il nome della rosa (The Name of the Rose), an intellectual mystery combining semiotics in fiction, biblical analysis, medieval studies and literary theory. He has since written other novels, including Il pendolo di Foucault (Foucault's Pendulum) and L'isola del giorno prima (The Island of the Day Before). His novel Il cimitero di Praga (The Prague Cemetery), released in 2010, was a best-seller.

Eco has also written academic texts, children's books and essays. He is founder of the Dipartimento di Comunicazione (Department of Media Studies) at the University of the Republic of San Marino, President of the Scuola Superiore di Studi Umanistici (Graduate School for the Study of the Humanities), University of Bologna, member of the Accademia dei Lincei (since November 2010), and an Honorary Fellow of Kellogg College, University of Oxford.

"Translation is the art of failure."
"If two things don't fit, but you believe both of them, thinking that somewhere, hidden, there must be a third thing that connects them, that's credulity"
"When men stop believing in God, it isn't that they then believe in nothing: they believe in everything."
"The good of a book lies in its being read. A book is made up of signs that speak of other signs, which in their turn speak of things. Without an eye to read them, a book contains signs that produce no concepts; therefore it is dumb."
"Fear prophets and those prepared to die for the truth, for as a rule they make many others die with them, often before them, at times instead of them."
"I have come to believe that the whole world is an enigma, a harmless enigma that is made terrible by our own mad attempt to interpret it as though it had an underlying truth."
"The real hero is always a hero by mistake; he dreams of being an honest coward like everybody else"
"Nothing gives a fearful man more courage than another's fear."
"There is only one thing that arouses animals more than pleasure, and that is pain. Under torture you are as if under the dominion of those grasses that produce visions. Everything you have heard told, everything you have read returns to your mind, as if you were being transported, not toward heaven, but toward hell. Under torture you say not only what the inquisitor wants, but also what you imagine might please him, because a bond (this, truly, diabolical) is established between you and him."
"The postmodern reply to the modern consists of recognizing that the past, since it cannot really be destroyed, because its destruction leads to silence, must be revisited: but with irony, not innocently. I think of the postmodern attitude as that of a man who loves a very cultivated woman and knows he cannot say to her, ''I love you madly,'' because he knows that she knows (and that she knows that he knows) that these words have already been written by Barbara Cartland. Still, there is a solution. He can say, ''As Barbara Cartland would put it, I love you madly.''"
"The comic is the perception of the opposite; humor is the feeling of it."

The Los Angeles Times 27 Jan 2023
For your safety ... There may be a whiff of Umberto Eco’s “The Name of the Rose” in the air, but the Stockholm-born Saleh, who first made a name for himself as one of Sweden’s most prominent graffiti artists, steers clear of splashy reveals, allowing the storyline to build to an intense simmer without boiling over into more conventional stuff ... 2 hours.
Edit

Letter to the editor: Credulity

Missoulian 26 Jan 2023
However, American critic, and biographer Carl Clinton Van Doren (1885-1950) stated that “the race of man, while sheep in credulity, are wolves for conformity.” Italian philosopher, novelist and political commentator Umberto Eco (1932-2016) postulated of the workings of it in “if ...
Edit

Missoulian 26 Jan 2023
However, American critic, and biographer Carl Clinton Van Doren (1885-1950) stated that “the race of man, while sheep in credulity, are wolves for conformity.” Italian philosopher, novelist and political commentator Umberto Eco (1932-2016) postulated of the workings of it in “if ...
Edit

Debut collection takes on the past, identity and the roots of selfhood

The Keene Sentinel 14 Jan 2023
Hoover seems certain of the answer; the smattered beautiful bursts of plainly stated biographical moments (“Once I fell / in love with a woman who’d been a thief”; “I’ve always wanted / a boyfriend like you language making it impossible / for her to love me back” interspersed ...
Edit

Wall Street Journal 10 Jan 2023
When one of my colleagues asked ChatGPT for a 250-word summary of Umberto Eco’s philosophy of translation, it produced a text that would put many educated adults to shame—and it did so within seconds ... .
Edit

The Written and the Unwritten World by Italo Calvino: a great mind at work

The Times/The Sunday Times 08 Jan 2023
Before Elena Ferrante, Calvino, alongside Umberto Eco, was the most famous modern Italian writer in the Anglosphere ... Yet most of the pieces in TheSponsored. .
Edit

OPINION | ON BOOKS: Power of unread books — a mountain I aspire to climb

Arkansas Democrat-Gazette 08 Jan 2023
Taleb begins by discussing the personal library of author Umberto Eco, who has a famously large collection of more than 30,000 books ... While at first glance a visitor to Eco's library might assume the shelves were a testament to Eco's prodigious knowledge, the real reason they were so voluminous was because Eco was hungry to read so much more.
Edit

Scheerpost 08 Jan 2023
By Michael Brenner ... Yet, the movement he inspired and instigated is very much alive ... Ghost Dancers ... Eric Hoffer’s THE TRUE BELIEVER (Mentor 1951); Umberto Eco’s essay “UR FASCISM” (NYRB, July 22, 1995). 1 The formulation of Fascism’s distinguishing traits is borrowed from Eco; the quotes are all Hoffer’s.Here are the most salient and pertinent points ... .
Edit

McCarthy debacle comes with a lesson: There's a downside to being a party of fascist trolls

Alternet 07 Jan 2023
I favor the famous 1995 essay by Italian philosopher Umberto Eco, who argued that fascism is a movement of "rigid discombobulation, a structured confusion," replete with contradictions and incoherencies, and yet that "emotionally it was firmly fastened to some archetypal foundations.".
Edit

This Day in History — January 5

Review: 'The Archive Is All in Present Tense,' by Elizabeth Hoover

Finger Lakes Times 04 Jan 2023
Hoover seems certain of the answer; the smattered beautiful bursts of plainly stated biographical moments ("Once I fell / in love with a woman who'd been a thief"; "I've always wanted / a boyfriend like you language making it impossible / for her to love me back" interspersed ...
Edit

New York Post 03 Jan 2023
More On. life. Venus in Aquarius. Make misfit friends and learn to love your own weird. Winter Mercury retrograde predictions for each zodiac sign. Intimacy, exes and hexes ... Capricorn novelist Umberto Eco maintained, “I believe that what we become depends on what our fathers teach us at odd moments, when they aren’t trying to teach us ... see also ... ....
Edit

The Observer 01 Jan 2023
During the lockdown years, I kept reading articles by novelists saying how unproductive they were feeling, how virus narratives had colonised their subconscious minds, destroying the creative impulse ... With nods to Umberto Eco, it tells the story of Beatrice, the librarian of a convent who comes into possession of a book of dark and stunning power ... .

Turkey’s two-faced ‘sultan’ is no friend of the west. It’s time to play hardball
The Observer
05 Feb 2023